I’ve always had good friends but life has always been characterized into phases and friendships also. Just like dysfunctional families, a term I really like, even my relation with my friends is dysfunctional.

Most are the heart warming, genuine, I’ll be there for you always kinda people. Some are the exes. Long forgotten, but they reside in the deeper throes of thr heart, cause they cannot be forgotten. I’ve realised that it’s harder to make friends as you grow older. My general observation is that people are less open to deep interactions, I find that a precursor to great relationships. Shared emotions, common enemies, childhood secrets, crushes, heart break, usually, one needs to open up deeply on a personal level to feel that connect with someone else. Not many are willing to do that in real life now and most prefer the convenience of virtual life to fester and foster in the old friendships.

I’m cleaning out my room and trying to set everything for the next one year. It’s going to be a crucial year, this. Both personally and professionally. And as I rummage through my folder, I find among other things, the promise of hope. An unsaid promise that cannot be broken simply because it was never meant to be one. I read it in the words and I know that a lot of what I believe in and know is going to change. It has to…nevertheless, some familiar comforts, some lights, will guide me home. 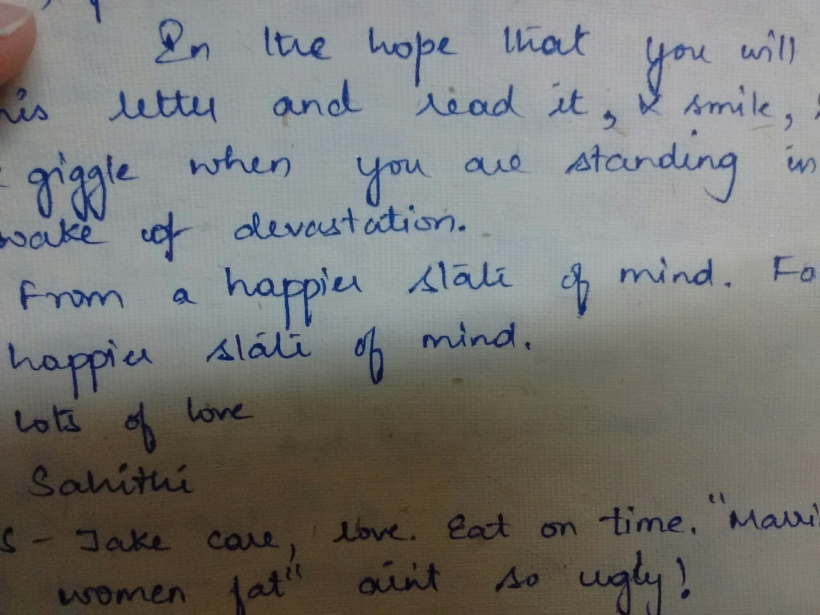 What are the odds of starting your day with a  compliment about your writing, to progressing through the day explaining why you cannot commit to a book, to finally indulging in a stimulating conversation with Author beloved to culminate a long day’s work, inspired to do some writing at least.

Yep, the odds are few indeed and I cannot even recall what led me to this moment. I may seem over excited about a small interaction but I cannot believe I just shared the room and even spoke to Mr Amish Tripathy, author of the best-selling Shiva Trilogy. (It irked me in a manner of sorts to see that on stage best and selling were not separated with a hyphen.)

Like most of the things that I love, my tryst with Shiva began in a weird way. My two besties from school gifted the first two editions of the trilogy on my Birthday and I had mixed feelings about them. Sure I had seen hoardings and Crossword best-seller lists but nothing had piqued my interest and I stayed away from chatter about the Nagas.

When I finally began the odyssey of finding evil with Shiva, it was a beautiful journey that shattered some pre-conceived notions and amalgamated myths into a seemingly believable story. The characters were sketched so beautifully that I was soon propagating them to my relatives. I remember indulging in a debate with them when I took a moment to marvel that I felt so passionately about this, if  only I felt the same about what I was studying back then – engineering.

Anyway, today when I rushed to the National Gallery ofModern Art, I was berating myself for not having left office earlier. I reached in time to catch Amish discuss how Shaivites tend to be slightly anti-elitist.

Some habits die hard and soon I was taking notes in my little orange journal. The topic then shifted to the observation that myths in India are alive despite there being a mix of different cultures and traditions. The author remarked that one of the reasons why this happened is that old stories have been re-invented and delivered in a new bottle of wine.

That’s perhaps the main reason that several myths have survived till date and with every passing generation, there will be more additions to that list. The interest in our history and culture is being revived slowly but surely.

A person in the audience had a brilliant question – he asked why Indian people were not as accommodating as our neighbours. To this Amish quoted a small incident from the Mahabharata during the battle, in the field. He spoke about the instance when Arjuna fired an arrow on Karana’s chariot and as a result, it moved leagues away from their original position. When Karana fired an Arrow at Arjuna’s chariot, it only ended up moving a few feet but Krishna commended his opponent. This angered Arjuna and he was keen to know why. That’s when Krishna had to elucidate the importance of context. The chariot that seated Arjuna also had to bear the weight of Krishna (the lord himself) and Hanuman. If Karana’s arrow could cause any displacement at such a heavy vehicle – was it not something to bemarveledd at?
This is a life lesson – every time you judge a person, you have to look at all their circumstances. You cannot make a comment without understanding the true depth of these things.

It would not be wrong to state that our 200 years of colonial experience has shattered our country’s morale to a great extent and caused intensive damage to the cultures of our society however, change is in the air and by actively fighting and believing in who we are, we can herald this change.
Schools here study Shakespeare and O’Keats instead of understanding out own legacy of Gibrail, Rumi, or Mirza. Our own gems are foreign to us. What use is studying the American andFrench Revolution, the Queen who was despised by many, and of wars that plagued the world, if we do not know our own roots?

Did you know that a lot of Persian history was wiped off mainly because the Arab invaders took some stringent measures wherein they punished people who spoke or wrote Persian. That is why it is said that culture can be killed by killing a language.

On the whole, it was a remarkable session wherein I got insights from two other interesting people. I got an autograph from Amish and managed to get a photo as well. Oh yes.

I loved the sheer positivity exuding from him and grateful to that one moment of destiny when I chanced upon this event and decided to go.

What I take away from Mumbai will be these insightful little discussions and memories that will remain with me long after the beer in your mug is over.

Here’s to more of my kinda fun.

It works! Every simgle time. These words – Blah, lah, la, they’re so amazing. cause they convey everything you want to say and yet deep down, mean nothing.

And then there are days when every fibre of your being screams winner!

It’s been one such day. Don’t get me wrong. I didn’t ace the test that happened today. Three hours to write everything you knew about four subjects, two of which were so similar I forgot what I read where, and you’re an alien if you didn’t complain.

No, not kidding. I didn’t burn the midnight oil so I do not deserve to get your sympathies. I slept quite fine, thank you. Kind of makes me hope I have tests every day – such was the blissfully deluded sleep.

Let’s just skip the mandatory ‘how was your test?’ and assume it was the best ever. (I don’t even know if I passed Sem 1, that’s how early we get our results out here).

Well I’m glad it’s over. And you know what? I made a commitment and stuck to it. Okay fine, it wasn’t a biggie. (Should really stop hanging out with ‘Mol. He’s ruining my vocab.)

I just controlled myself really hard and with the weirdest measures to avoid going to the city. Now you’re thinking really? That needs commitment? Hey, when you’re left with ten days to show up at home with a puppy face, ten days is a lot of time for the meagre amount of pocket money that you are trying to save.

There are days when I’m so baffled by my thoughts that I give up thinking. Nah. Not really. Sample this: When I resentfully thrust a 500 under his nose and the Bhaiya at the coffee shop says no change, part of me is glad that I can stretch it a little longer.

Unfortunately though, just the way in which most of my resolve eventually crumbles, this one does too and by hook or crook, you’ll certainly find me sipping on the delicious cold coffee until the syrupy sweetness has emptied and the straw nuzzles the glass to make noises that people find obnoxious. It usually always elicits some disapproving looks and even an ‘eww’ from some. Hey, it’s coffee, okay? A Sinfully good one.

The simple pleasures of life I tell you. A warm shower, a strong cup of coffee, some funny conversation and a good book. Life is simple really. (Course not,  who are you kidding!)

And then the slightly confusing but welcome calls from home mostly every night after 9 (They just discovered that the landline works! What’s more, it even offers free calls. And who doesn’t love free, right?)Well, you have those calls that leave you wishfully thinking you could teleport and eat the chicken that is most certainly the dinner at home. You talk, and talk some more and there’s the awkward ‘what else?’

So you weigh out some more info(you do understand why you need to be selective here, don’t you?) until finally your friend sees her crush and you have to go stalk them and annoy them until they finally hate you and yell. (Thankfully, we’re still stuck in stage one, might take this semester to get over this.)

So, time to face reality and hope to God that the soya they’re serving me today is at least a little good so that it won’t have me cursing the missed bus.